Have you ever felt like giving up? Do you look at your life at times, your finances, relationships, business and body and see the things that still have not changed? Do you look at the world around and get discouraged when you see people still choosing hatred and intolerance, still holding to the rightness of their point of view and fighting for it, literally to the death?

Years ago, Gary Douglas, founder of Access Consciousness®, got to a point where he felt like, after 23 years of continuously creating and choosing consciousness daily, no matter what he did, consciousness would fail.

At the very moment he was ready to give up he began to hear whispers, as though carried on the wind. It was the trees, and the grass and the critters and the birds and the flowers saying “We’re here for you. We’re consciousness. We’re here.”

We’ve all had times where giving up seemed like the best choice. Echoes of, “What’s the use? My choices don’t really make a difference” and “I’m alone in this” often overwhelm our senses. In spite of those thoughts and feelings, you are NOT alone! The earth functions in consciousness, the plants and the animals, every molecule of this universe function in consciousness, total allowance, total absence of judgment, and they are calling to you.

Consciousness is the way to go beyond the limitations and change things. You can be the creator of an entirely different future. Somewhere you’ve always known it was possible.

In the words of Gary Douglas, “What would it take for you to realize how crucial you are to the possibilities of the world?” 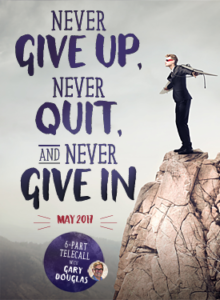 Gary Douglas 6-Part Telecall Never Give Up, Never Give In, Never Quit. Learn more and sign up HERE.

Yes I am more than willing to stay in the question!
The earth and its people are to import not to!
Love your work!

Love from the Netherlands

This is exactly what I needed to hear and read this morning…
Feeling very overwhelmed and out of sorts.
Thank you!

I agree. We are all crucial for the possibilities of the world. I have never given up and I will never give up because consciousness doesn’t give up.

Thankyou for this post it came at just the right time I was feeling like my heart had been ripped out of my chest and my lifeforce completely drained. Just need to hang on in there. x

I had those moments a couple of week ago and Lucky me, I had fantastic BF friends who were able to clear things for me, giving me questions to ask.
I will print this out and keep it for other moments – if the will come.
Thanks for the reminder and the consciousness.
Yes, I will choose for consciousness.
With love, Ellen

Shocked ! I feel very depressed this evening because I tottally decided I have power I have special abilities for healing people. I m couraged and I stepped the road . for a week completely adapted to this continuosly communicate with people tryings to talk about what is access bars and benefits of this for getting seans but I cant get Them Turn back. I didnt give up get in touch people and talk about my seans. the last now again ı didnt conculsion of my randevu. She said ı will think and turn back . At the last ı feel tired drained tickled my mind have an obstacle about this? Now while I was praying with my tears and I thought give up ı said I feel tired , I saw your message . As if you heard me I wait your helping thouhgts . Regards Turkey