Ever had one of those days when you were excited and enthused because you stepped outside of your comfort zone and chose something different?

Then a friend or family member came along who is “supposed” to care for you and you told them about it. Instead of being thrilled for you they said, “You should be careful about that, are you sure that’s the right choice?”

And all of a sudden you cranked it down, deciding you must be wrong for choosing differently and everything came to a screeching halt…

“This reality doesn’t give you permission to be everything that you can be,” Simone Milasas pointed out on this month’s Creative Edge of Consciousness call.

We live in a world that’s all about following rules and regulations and, if you choose something that’s outside the norm, or considered wrong, you suffer for it.

Where are you in the computation of your life?

As Simone pointed out, “What if you could ask for even more different energies to show up that you cannot cognize or define, you cannot go to a conclusion or create the limitation of what could show up, based on only choosing what you know?”

Centuries ago, when explorers sailed across uncharted seas, they were guided by the stars and the promise of new worlds and treasure beyond the horizon. Discovering the infinite possibilities of you is similarly fraught with adventure.

Are you willing to be unpredictable and have way too much fun?

Are you willing to see the greatness in you even if you’re rejected by others?

“In truth, you should be willing to be rejected because it doesn’t mean anything,” Simone explained.

There is no rejection in a reality of infinite possibilities, simply because there’s no judgment. Just a hell of a lot of fun.

“If you’re willing to have and be all of you, it doesn’t matter what anyone else’s point of view is and usually that becomes the greatest inspiration for others,” she added.

This is truly the adventure of living. Where you operate from a constant state of asking questions and nothing is the same as it was yesterday or even five minutes ago. You step into a level of receiving that nothing else empowers you to be.

So, if it seems like more fun than a normal life, here’s a question you can ask every day: what would it take for me to be greater today than I was yesterday?

What else is possible that you have not yet asked for, that if you did ask for it, would create you being in a reality of infinite possibilities? 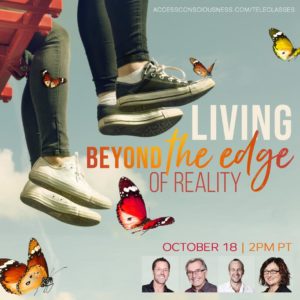 Would you like to join a club that is always changing, never boring and super fun! It’s the Creative Edge of Consciousness