This reality is a huge perpetrator of the lies of obesity, and it’s why so many people are frustrated with diets, the so called “experts”, themselves and their bodies.

Could you be unknowingly functioning from some of these lies? Here are three of the many lies you may have bought.

Lie number 1.
Our bodies are unconsciousness objects that should bend to our will. What if your body IS actually conscious? What if it knows what is best for it? The idea that we should “have dominion” over our bodies springs from religious tenants that tell us we are far greater than our bodies, as well as the earth and the animal kingdom. Does that seem heavy or light to you? How much of a superior attitude do you have to take to believe that? Has that attitude ever worked for you?

Once we actually acknowledge that our bodies are consciousness, all kinds of new possibilities open up. Partnering with our bodies, instead of trying to lord it over them, takes us from the place of antagonism to a space of cooperation. Can we over ride our bodies and their knowing? Absolutely, though the results are seldom what we think they should be and the results seldom last.

What if you honored your body rather than exercised power over it? How much could that change for you?

Lie number 2.
The experts know more than you do about how you should treat your body. Why should anyone know more about what’s good for your body than you? Doesn’t the idea of imposing someone else’s regime on your body seem a little ludicrous? Most of us were taught early on that we can’t trust ourselves to know what we know, and we should always trust the “experts”. This insures that we will be able to be controlled, and that we will never step into the communion that’s possible with our bodies. What if you were willing to begin to know what was true for you, which includes the capacity to communicate with and listen to your body? What if you became your own “expert?

Lie number 3
Curing obesity requires will power. Willpower is a highly touted concept in this reality but let’s take a closer look at what it actually entails. The idea implies that we should come to a decision, then impose it with what amounts to force, effort and violence on ourselves or our bodies. Notice there’s no question in “willpower”, nor is there any possibility of change. How well do you respond when someone tries to force something on you? If you’re like most of us, forcing creates a huge amount of resistance and a kind of “to heck with you” attitude! Using will power also necessitates us overriding and cutting off our knowing, if it contradicts what we have already decided we should do. If you use will power in connection with your body, what are the chances your body is apt to do what you want it to do? Probably slim to none! All that will power does is to set up resistance and reaction and a battle. Are you willing to let go of will power in favor of question and knowing?

These are just three of the may lies that this reality perpetrates about obesity.

Whether it’s about gaining enormous amounts of weight or our bodies breaking down, learning how to stop judging our bodies creates a completely different possibility.

What if obesity isn’t difficult to change? What if gorging on judgment is more of a killer than gorging on food?

What does your body want to be or do that you’re not acknowledging?

If you’re interested in more on this topic, you’re invited to join Gary Douglas and Dr. Dain Heer for a very special year-long telecall ….. two calls a month for 12 months – The Obesity Clinic. Click here for all the details! 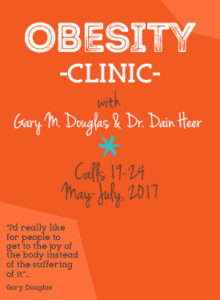