Political leaders are some of the least trusted people on the planet. They’re quick to make promises that rarely get fulfilled once they’re in office. Their self-interest and foibles are obvious. And still, people are drawn in by politicians—we believe they will institute the changes we desire to see. Have you ever wondered why this is so?

“What you look for in a leader is somebody who can give you the answer or be the answer for you,” founder of Access Consciousness Gary Douglas said recently on the Creative Edge call.

The monthly Creative Edge call is not for the faint of heart. Being on the creative edge of consciousness is radical, paradigm-exploding, never boring, and uncomfortable at times. For anyone who desires true change, there is nothing else like it.

This month’s call was a dynamic three-way conversation between Gary, Dr Dain Heer and Brendon Watt about the stranglehold of limitation in every area of life. It is so insidious we’re not aware it’s actually going on.

For instance, have you noticed that following the rules and regulations that will supposedly lead you to something good, never does? Instead, you constantly judge yourself thinking you must be wrong.

The golden rule is that we must follow and obey God. We must do unto others as they would do unto us, except that doesn’t work either. How often does someone try to stomp you to death because they think you’re a weak link since you’re kind?

Even if you become aware of a different possibility, how often do you think someone else will do it? We never look at ourselves as the leaders that will allow possibilities to actualize.

A creator is a leader and a leader never has the answer. Rather they’re always in question: what can be different here? And what’s it going to take?

There is a whole different way of functioning when you’re on the creative edge of consciousness. What if you had a totally unlimited menu? Life would not be predictable and as the leader of your life, you would be the one with total choice! 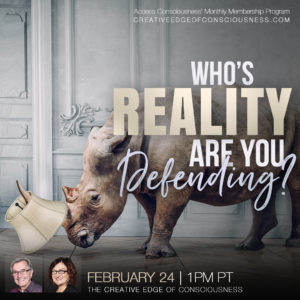 Would you love to be part of a club that is never boring and always changing? Join the Creative Edge of Consciousness Club