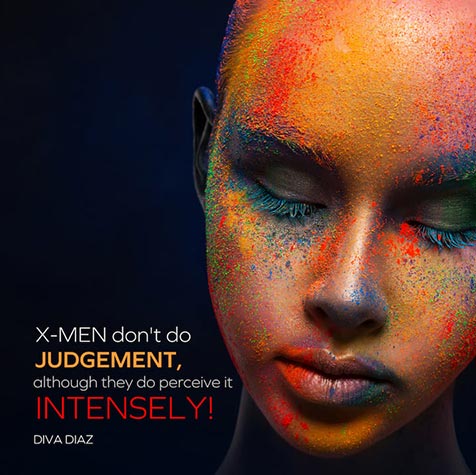 Is it time to discover what disability labels really are? What if this is just the beginning of what else could be possible on the planet? accessconsciousness.com/xmen

Breaking a bully’s stranglehold is not about how to stop a bully, it’s not about going deeper into the wrongness of bullying, the fight and conflict. This is about a totally different conversation.

These days, bullying is a familiar subject in society. But when I was growing up, there really wasn’t a word for what I experienced on a daily basis once I started going to school.

First, it was being bullied at the bus stop. Then the bullying took place during recess on most days. It finally culminated, over the years of schooling, into daily mental and physical bullying.

How do you stop a bully?

It is funny to write about this now, because at the time it wasn’t something I considered to be wrong. I don’t ever remember confiding in anyone that I was being bullied. Not my mom, my sister, or my father….Somewhere I must have decided this was just a normal part of life.

I learned to avoid the bullies and keep my head down. I learned not to go to places where I could be bullied: bathrooms, hallways, parking lots, after-school events and even parties.

Although I didn’t believe, deep down, the mean things bullies said about me, I never really fought back either, or sought ways to stop a bully. It just made me choose different paths. Somehow I never visited the bathroom the whole time I was in school….I’m not sure how I did that!

I say all this to point out that the impact bullying has on people is not the same for everyone.

Even today we see a range of responses. Some kids just weather it, while others choose to fight back. Still others suppress it dynamically until one day they suddenly explode at anyone who crosses their path.

What is this thing we call bullying? What makes someone a target?

Deep down I always knew that I drew the bullies’ attention because I was strong, not because I was weak. But in order to be continuously bullied you have to suppress any strength you have. You have to believe they are right and you are wrong.

You become what is called a convenient target because you bury the strength and the potency of you so deep that even you forget it is there.

But I wonder …what if everything is the opposite of what it appears to be?

What if all those things I decided made me a target were actually what the person bullying me thought of themselves—and so desperately tried to hide behind their behavior?

Whether you experienced bullying as a child, a teenager, a young adult or even yesterday, you can start a different conversation with yourself and ultimately with those around you.

I have realized, having used the tools of Access, that it is not always action that’s required to change what is occurring. Sometimes it is being an energy that you haven’t been willing to be.

One of my favorite movie scenes is from The Blind Side, a story about Michael Oher, a homeless teenager who is taken in by a well-to-do family and becomes a famous footballer. Michael is hugely strong, but initially the football coach can’t get him to tackle properly because he fears his own strength. Sandra Bullock’s mum character sees what is going on and she appeals to Michael’s protective instincts. She struts out onto the field of play and says, “Michael …do you remember when we were in the bad part of town, and you told me not to worry ‘cause you have my back?” She points out that he requires to be that energy for the quarterbacks. All of a sudden he chooses something different. Cut to the next scene and he is tackling happily.

If I had seen that movie scene, or had some of the Access tools when I was younger, I would have made different choices. I would have known all I had to “do” was “be” a different energy. It is an energy we all have access to; I call it having my own back.

What are some steps to choosing this?

First, acknowledge what is occurring between you and the bully; it may not be personal. You are just someone within easy reach or earshot. Acknowledge also that you are everything the bully believes he or she is not.

Second, start to explore the strengths you have been hiding. You can do this by asking questions: What talents, abilities, and capacities have you not been willing to be? What strength are you that you have suppressed—for whatever reason?

Third, what lies, whose lies, and how many lies have you been using to create the bullied life you are choosing?

These tools will start breaking the stranglehold that bullies think they have over you.

What if it’s not about how to stop a bully, but more about being willing to step into the potency of you?

You can explore more of these tools in this program “Never Let A Bully Win”.