The caterpillar (known as a “Bastaardsatijnrups” in the Netherlands; English translation is a bastard satin caterpillar) was on my client’s (Judith) skin for a second. This was enough for it to shed its burning hairs on her skin, which almost immediately gave this huge reaction: her skin turned red, felt like it was on fire and the skin started showing disks of thickness where the caterpillar has been.

After half an hour, her skin was really irritated and blisters formed.The reaction of this caterpillar is so intense that people usually have burn-like symptoms that itch and take a few weeks to heal.

While receiving the Access Energetic Facelift Body Process, Judith felt tingling through her whole body. I put my hands on the places the caterpillar had been with a cloth in between so that the burning hairs of the caterpillar would not touch my skin. After 1.5 hours in that position the skin had calmed down and the irritation, itch and burning went down to a minimum. The whole session was calming for her and she was also aware of a lot of shifts in her body.

The itching came back the next day and in the days after that. So Judith ran the Energetic Facelift Process on it everyday. She did not have flu symptoms, which are very common when people have contact with this kind of caterpillar. She KNOWS that this is due to the immediate Facelift session. 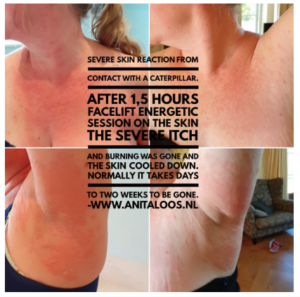 Normally with this caterpillar reaction, people would go to the doctor and receive a soothing creme for it. That was not necessary since the Facelift Process reduced the reaction to a minimum. Experiencing this shift from the extreme redness, burning and itching to just a slight redness and almost no itching and burning was a huge relief for Judith.

To find out more about what the Access Energetic Facelift could do for you, discover more here.