Have you doggedly been trying to change some aspect of your life—finances, job, relationships, or place of residence—but cannot seem to grasp when, where or how to find the change?

“The moment of change comes at odd times,” Gary Douglas, founder of Access Consciousness® explained on this month’s Creative Edge of Consciousness telecall.

Don’t look for neon lights or a marching band, the moment of change often occurs with a subtlety of awareness.

Gary gave the example of purchasing a herd of Friesian horses and discovering that instead of the 30 horses he was expecting, there were 70!

Even though it was costing him quite a bit to feed and take care of so many horses, Gary didn’t decide he couldn’t afford it. Rather, he was in the question of, what’s it going to take to change all this?

Then one day, as he was talking about the Friesian horses on a blog talk radio show, the interviewer said, “People would love to donate to that. Could you have that?”

Gary instantly said he would give a horse to anybody who donated $1000. It wasn’t pre-planned or intentional. He simply seized the moment of change that was available.

“Most of us have these choices that will change things,” Gary pointed out.

Consequently, many people will ignore, refuse or deny the moment of change so they won’t have to do something different.

Everything is about possibility. So, you’ve got to look at everything you’re creating from to see what is possible. Often, a choice may not be logical. It might seem downright insane, but you choose it anyway, knowing that it’s going to create something great.

Remember, choice isn’t a done deal. How are you going to deal with it once it’s created? What’s the additional choice? What other choices do you have that you haven’t considered?

He added, “If you realize every choice is a creation, you cannot ever choose from unconsciousness. You have to be aware of what that choice is going to create.”

Just for today, choose to be aware of whatever your choices create.

“If you look from that point of view, then your capacity to expand your life grows,” Gary said. “If you look for the good, the bad, or the thing that’s going to create the result you want, all you’re doing is limiting all the possibility you can have in your life, so change can only occur under certain conditions—and you have created the conditions.” 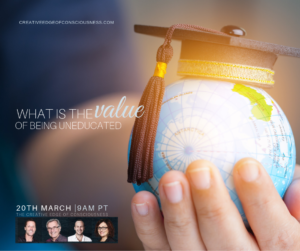 Join a club that is always changing, never boring and super fun! It’s called the Creative Edge of Consciousness Club