It’s that old familiar feeling of bumping up against the same problems and limitations, time and again.

You know you’d really like to change it. But like the fleas put in a glass box as an experiment, the ceiling appears very solid and real. After hitting the lid a few times, the entrained fleas stop jumping as high as they actually can — even when the box is open.

“Most of us won’t create our lives after we hit limitations two or three times,” founder of Access Consciousness®, Gary Douglas said recently on Voice America radio. “Getting out of the box is realizing that your life is stifled in so many ways.”

Part of the reason we create the boxes of our lives is the epidemic of violence on this planet.

In the face of any form of violence we usually cut off awareness and make ourselves small. Or else, we put up walls and barriers, hoping to keep it out. Trouble is, that doesn’t work.

Money is tied to violence

If you look at it, you’ll realize that war is one of the biggest industries around.

There is a movement to change the violence on the planet, it’s called #actsofconsciousness. 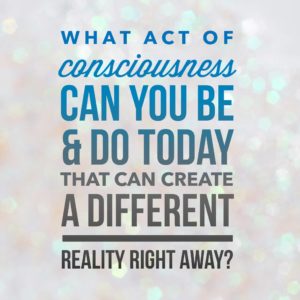 Dain says, “Acts of Consciousness are within your power and capacity to choose and they will actually create more consciousness in your life and on the planet.”

So, what Act of Consciousness can you be or do today that can create a different reality right away?

Watch this video from Dr. Dain for more about Acts of Consciousness.

Is now the time to put into action the consciousness that you (and we) are?

For more check out the Acts of Consciousness Facebook Group.