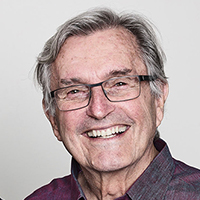 Gary Douglas is a bestselling author, international speaker and business innovator. As the founder of Access Consciousness®, a global movement that transforms lives with simple-yet-profound tools, Gary has become an internationally recognized thought-leader, facilitator and pioneer.

What if you could change your life faster than you change your clothes? What we have available to us is so far beyond what we have ever chosen. Yet we often only allow ourselves to choose it in an emergency situation. We have infinite choice. Yet we keep acting like we don’t have choice.

We haven’t been choosing to live. We’ve been choosing self-preservation. That’s not living. We can’t see us in totality. We see only the small piece we have preserved.

The reality is that we do it because we aren’t being received. We had to preserve us in the face of other people’s insanity, and their illusion of reality. Their insanity and stupidity still maintains some threat to your awareness of you.

People love the not-you. When you become you, they get scared and get out. Who will you be if you change? Who cares? An infinite being is everything without judgment. What if you would be you – without an apology?

“Who have you decided you will lose if you change totally?”

Who have you decided you will lose if you change totally? You? Or is it the fantasy of you? Fantasy is what you’ve decided is beyond your imagination. Your imagination is the limitation of your reality. If you can’t define something, you can’t control it.

“If you can’t define something, you can’t control it.”

What if you truly can change anything? The “9 trannies” (not the cross-dressers, but transformation, translocation, transfiguration etc.) are the ways in which you can change anything. However, now you are using them against you, rather than for you. We use them to create a fantasy world. We’re willing to transform into things that don’t work, rather than transform into what does work.

What if you had the ability to change anything from what it is now into something different? We would rather have that which we have decided can’t exist as real. Instead, be so real that your presence changes everyone that you come in contact with, speak with, and touch.

What if you could move from one location to another without a car, plane, train, or bus? What if you could migrate across space? If you have ever had the experience of driving somewhere in a car and getting there in a shorter period of time than you should have, you have been transmigrating – not folding time, but folding space. You move faster than this reality and get frustrated – cursing at the slow drivers, who are functioning from the speed of slug. When it’s frustrating, you’ve got to ask: “What information am I lacking?”

What if it were actually possible to change the sexual energy of any moment or anything at will. In so doing, you don’t function from your sexuality as the source of your reality, because sexuality always requires judgment. When ‘you can’t stand someone’ you will not receive anything from them. What if you could change that by asking a question? “How can I change this? What can I be to change this?”

What if you could actually be the energy that generates and creates a different reality than what should be? Have you ever stopped a vehicle in an amount of space that is less than you should be able to, in order to prevent a crash? You have the ability to change something that is going to happen in the future so that it doesn’t have to occur. Avoidance of something is the creation of it. What are you avoiding that you are creating in order to prove that you can avoid it?

What if you could speak in any language? All language is literal, in a sense, and is based on an energy. What if you could bring into existence the energy of any language required, just by asking? How many of our languages are separations? All of them are to ensure that we don’t have clear communication. We have used language as a weapon against ourselves. We’d rather believe that what comes out of our mouth is more real than what is in our heads. A language is an ability to translate something into a definable construct that you can gift to others. There are many languages that are not definable – like the language of question. When they’re not definable, we consider that we can’t use them. The language of total awareness would give you the ability to have everything you want with ease.

The 9 Trannies Specialty Class facilitated by Gary Douglas and Dr. Dain Heer is now available in the Access Consciousness shop!

Listen to more about the 9 Trannies and being all of you.

Thanks for this post, Gary. Now I think I know why I’ve had these trannie things on the brain (and no, it’s not because of that Jenner person!) lately – you have a class coming up in July! I’m looking forward to the day I have the required prerequisites to take it, but so far I’ve only done Bars. HDIGAB! 🙂